One of the biggest problems of 2003 was the need to find a new studio location.  The building at 4415 San Jacinto was in terrible disrepair and property values and taxes were skyrocketing as revitalization moved east along the Ross Avenue corridor.  Originally the plan was to move to the old Sears warehouse building rebranded as Southside on Lamar.  The developers had offered a large basement space and plans to move were well underway.  The move was

announced with great fanfare on the station.  Special t-shirts were printed, press releases went out, but at the last minute the deal fell through.  Estimates of up to $250,000 to build out the donated space, which we would not own, was the main problem. 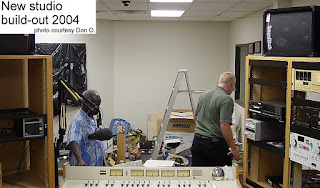 After much searching our new home was found at 5353 Maple Avenue.  The landlord agreed to build out the space to meet our needs.   Volunteers and station engineer Mike Doyal spent countless hours preparing the new space and installing a console that had been donated by another radio station.  Mark Ivey and Glen Wilson built new CD cabinets for the station's music collection.  The physical move began in August 2004 with many volunteers helping to move the music collection and office equipment from the old white house to our new location.  The final cut-over took place at midnight on August 15, 2004.  Thrashin' Alan and the Hard Time radio crew together with engineer Mike Doyal, Warren Harris, and others did the big move of the major studio equipment.  The final broadcast from San Jacinto was by Bo Bo and the Dirty South show and was done from Dave's office on portable equipment as the main studio was moved.  The neighborhood Dallas Police patrol stopped by to wish us well in our new location.  An all night party ensued at the old location until early in the morning.

"I was the last one in the upstairs studio. I sat there for a long while just me and bottle of Patron as I listened to a deafening silence of that room after 21 years and so much greatness. Blue Lisa and I were the last ones to leave San Jacinto as the crowds gathered just outside the fence line like buzzards waiting for the last breath.  We circled back around pulled back into the driveway, blowing the horn, just to see them scatter as they started to break in and the sun was coming up."

When Dave Chaos returned the next afternoon, the air conditioners and many fixtures had been stripped from the old building by thieves. 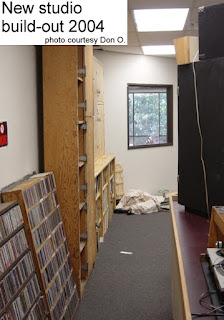 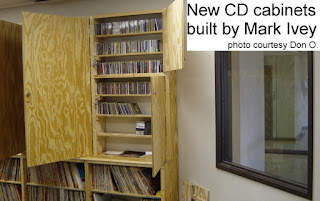