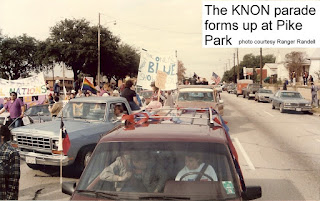 Station manager Jeff Murray and program director Craig Taylor decided that the best way to galvanize community support would be to hold a large parade and rally in support of KNON.  Planning, permitting, and publicity for the event began in November 1986 and culminated in the parade on December 6, 1986.  The parade began at Pike Park on Harry Hines Boulevard, proceeded down St. Paul, past the First Baptist Church of Dallas (owners of The Criswell Center), then down Young Street to Dallas City Hall.  The parade Grand Marshall was country musician Ray Wylie Hubbard.  Estimates varied, but somewhere between 2000 and 5000 people participated in the parade or lined the streets in support.

Participants included marching bands, church groups, and representatives of most of the programs on the air on KNON.  The parade took almost 2 hours to fully wind through the streets of Dallas to City Hall.  The afternoon concluded with dozens of speakers on the steps of city hall speaking out in favor of KNON.  Speakers included politicians, musicians, and KNON staff and volunteers.  This amazing outpouring of love and support for KNON was followed by a record pledge drive the week after the parade.

If you have photos from the KNON parade we would love to see them!
Posted by KNON History at 7:28 AM