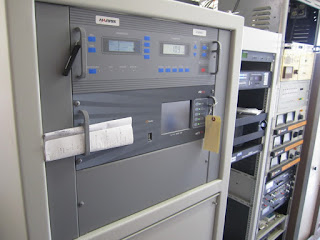 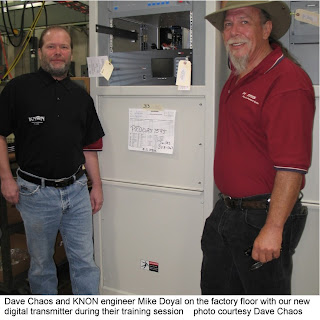 In 2008 the Corporation for Public Broadcasting began offering grants to non-profits to switch from analog to digital broadcast tramsmitters.  The grants were to cover half the cost of purchase, installation, and training for the new equipment.  Agape applied for and received a CPB grant and obtained some additional funding to help pay the costs.  However we were unable to raise the full purchase costs so we entered into a lease agreement with the equipment supplier.   Dave Chaos and engineer Mike Doyal went to receive training on the new transmitter operation and got a photo with the new transmitter which was still under construction.   KNON began broadcasting digitally on August 30, 2008.  This actually gives us two digital channels, HD1 and HD2, but due to lack of funds and personnel, we only broadcast on HD1.  In 2010 KNON received private funding that allowed us to pay off the remainder of our transmitter loan.

In 2008 KNON celebrated 25 years of broadcasting with a multi-format concert in Plano.  Unfortunately, high outdoor temperatures in the 100's led to very poor attendance.